The Silkmen return to league action this afternoon as we lock horns with Oldham Athletic in Sky Bet League Two at the Moss Rose.

Macc go into the game on the back of a 2-0 victory against Grimsby Town and we will be looking to make it back to back wins against the Latics.

Here is what Sol had to say ahead of the game -

A reminder that fans are encouraged to get to the Moss Rose as early as possible as we are anticipating a large crowd for the game.

Our opponents come into the game with 39 points from 27 league outings, putting them in 11th place in the Sky Bet League Two standings.

Last time out, our visitors were held to a 0-0 draw at home to Forest Green Rovers, but in their F.A Cup tie the weekend before claimed the scalp of Premier League side Fulham.

The Latics have been inconsistent away from home of late, winning 4-1 against Port Vale in their last away game but also fell to a heavy 6-0 away defeat at the hands of Carlisle on Boxing Day. 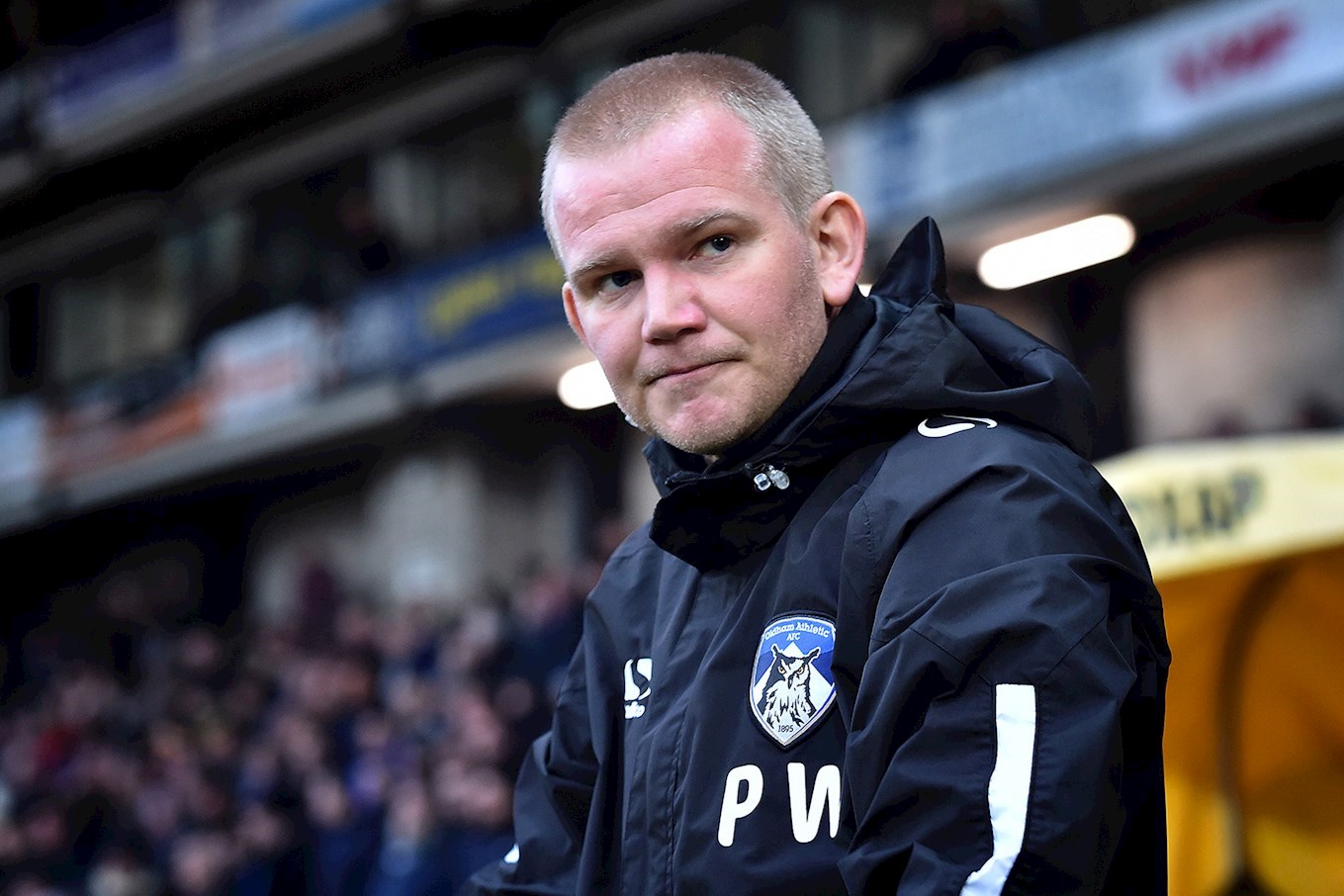 This is what opposition caretaker manager Pete Wild had to say ahead of the game:

“The one thing I will say about Macclesfield is that they don't play like a team second bottom of the league.”

“It'll be a really tough test, they're a team who are really organised and they'll look to make it difficult for us.”

You can read about players who have played for both clubs by clicking here.

Macclesfield Town moved within a point of EFL safety this afternoon, after they defiantly came back from a first minute Urko Vera penalty to claim another crucial three points at the Moss Rose through strikes from Harry Smith and Scott Wilson.

Both sides were greeted with a raucous reception as they entered the field, yet it was the visitors who would make a dream start to the proceedings. With barely ten seconds on the clock, Vera's darting run down through the heart of the Silkmen half saw him thread the ball through to Callum Lang and his lofted effort was adjudged to have hit the hand of Miles Welch-Hayes.

Despite the protestations of the entire Silkmen contingent, the referee pointed to the penalty spot and this was duly converted by Vera to hand The Latics an immediate lead.

Yet, our blue and white clad warriors used the setback to galvanise their resolve and sought to restore parity in the speediest time possible.

Backed by the vehement support of the Macc faithful, Sol Campbell's side advanced on Daniel Iverson's goal with energy and conviction.

Orchestrated by the reinvigorated Michael Rose, Macc exemplified all the qualities of a side fighting with every ounce of their being to preserve our EFL status and on 11 minutes, the experienced midfielder was unlucky to see his thunderous twenty-five yard effort fly marginally wide of Oldham's near post.

On 19 minutes, another tantalising Rose free-kick was floated into the penalty area and it was Smith who rose highest, although despite his best efforts he could only direct the ball over Iverson's crossbar.

The contest was beginning to develop into an increasingly physical one, as Pete Wild's men struggled to contain a Silkmen side who were committed to claiming the equalising goal which their performance unquestionably warranted.

A flurry of yellow cards ensued for the visitors, as Macc continued to lay siege on Oldham's goal and just before the half hour mark, it was the home side who threatened once more. Tyrone Marsh effortlessly lost his marker on the right-hand flank, before his pinpoint cross was met by the head of Smith - forcing Iverson into his first real save of the game.

Four minutes later it was Marsh who provided to be a nuisance to the Oldham defence once again, as he cut inside from the left and hit a venomous effort at goal which Iverson did well to claim at the second attempt.

As much as Macc were dominating both possession and territory at this point, The Latics undoubtedly posed a potent threat on the counter-attack and this was exemplified in the 38th minute when Johan Branger broke free down the left and after squaring the ball to Vera it looked as though the Spaniard had a routine finish to double Oldham's lead in front of him. That was before Miles Welch-Hayes heroically threw his body into the firing line to make a stunning block and preserve the one goal deficit.

With the half ebbing towards its conclusion, Lang suffered a minor injury for the visitors and whilst receiving treatment the Silkmen players made their way over to the home dugout for some liquid refreshment to a cacophony of applause. It was a defiant statement by the loyal fans congregated behind the technical area and one which unquestionably catalysed the team into one last push before the interval.

When play resumed Michael Rose's launched another mesmerising free-kick into the Oldham penalty area, yet the ball agonisingly the advancing Scott Wilson and Nathan Cameron who were inches away from bringing the two sides level.

Macc got their reward a matter of seconds later however, when Smith cut inside from the left before firing a majestic effort across the face of goal and into the far corner of the net.

As the players left the field for Sol to impart his infinite words of wisdom to them, the defiance from players and supporters alike was tangible.

Macc came out for the second period with more than just fire in their eyes, as they looked to complete what would ultimately become an inspiring comeback.

On 54 minutes they would get their just rewards, as Scott Wilson breached the Oldham defence before emphatically lifting the ball over Iverson to send the Star Lane End faithful into delirium. The celebrations which ensued were more than that normally associated with finding the back of the net - they were a statement that no matter what obstacles are put in our way, we will fight to overturn them and we will do so together.

Two minutes later the lead could well have been extended, as Callum Maycock tenaciously won the ball on the edge of the penalty area and after it broke to Rose, he was unlucky to see his thunderbolt of a strike fly inches over the Oldham bar.

Macc continued to search for a third and on 63 minutes a well-worked corner found its way to Tyrone Marsh, yet his twenty yard effort was brilliantly tipped around the post by Iverson.

Shortly after Callum Maycock fired over the bar from distance, before the visitors started to get a stranglehold on proceedings. Pete Wild had not experienced defeat since taking over caretaker charge of The Latics and his side certainly were not about to relinquish that record without a fight of epic proportions.

Despite this, Macc defended resiliently and with the sort of composure which elicits much optimism for the battles ahead. They fought for every ball, they fought for our club and they fought for each other - so much so that Kieran O'Hara was rarely troubled and even then, primarily with speculative efforts.

As the match reached it's finale, Oldham threw everything they had in search of a share of the spoils and with just two minutes left on the clock a long ball into the box was seized upon by Jose Baxter and with the goal seemingly at his mercy, Fiacre Kelleher launched a sublime interception before the trigger was pulled.

In the dying seconds Gevaro Nepomuceno sent all our blood pressures racing, as he hit what looked to be a pristine free-kick over the Macc wall and with O'Hara beaten, the sight of the ball rebounding off the upright was one which was greeted with copious amounts of relief by the Moss Rose faithful.

After Mohammed Maouche was dismissed for a professional foul on Marsh the referee then brought an end to proceedings, as the players celebrated an inspirational victory by applauding our loyal fans for their passionate support.

We may well have only claimed three points from the match, but the manner of the victory speaks volumes in terms of the fighting qualities which are undoubtedly infiltrating every aspect of the club and will be crucial over the weeks and months that follow.